Arby, the talented author  of one of my all time favorite blogs 'Boarding in Bedlam' , announced the other day that he was taking a hiatus from writing. The announcement was brief and without explanation and the ability to leave comments and wish him and his wonderful family the best of luck has been removed. I knew how I felt about that. Whaaat? No more 'Bedlam'?  No more funny and many insightful blog posts to get me through my day?  But I understand. Sometimes we need to make decisions that are the right one for our families, ourselves and we do not owe anyone an explanation.  But darn it, I wanted to let him know, he had my full support  and best wishes.  Today Arby wrote a post which gave us some of his reasons for making that decision, and I appreciate that.
Arby would be a person I would be proud to call my friend.  He is clearly doing a great job raising and homeschooling his kids. His love for them is so evident throughout all his posts and I love the fact that he doesn't take himself as seriously as some people tend to.

If you read this Arby, I just wanted to say, I wish you and your family all the best. Somehow I don't feel the poster who made the remarks that hurt your feeling so meant to do that. But I understand that feelings hurt just as much whether you meant to stub your toe or did it by accident. My daughter trusts me no less than the day before I told her that we were Santa. She quickly figured out the toothfairy thing too, although she already suspected that because the toothfairy was a real ditz.  Trust goes much beyond  playing Santa and the Easter Bunny. I look forward to catching up with you at the Homeschool Apologist. As much as I'll miss Bedlam, and I know I am speaking for a lot of people here, you have my support and unconditional friendship. You just go and do what's right for you and your family, the rest will sort itself out just fine.

Marlis
Posted by Marlis at Saturday, April 02, 2011 2 comments: Links to this post

No, he didn't escape...the curse is upon my son as well

Allergies. My daughter has suffered terribly with allergies and they were the reason for us starting to homeschool. Now, for the past few months I am watching my son get more and more allergic. He doesn't have eczema like his sister, and he doesn't have asthma (yet), but he is clearly allergic. We'll have to allergy proof his room. He has nasal symptoms in the mornings and lately his little cheeks look bumpy with little hives. His sister is quite upset about this as she is terrified he'll go through what she endured. And that was a nightmare. Missy's eczema is mostly gone now. She has a patch of KP (Keratosis Pilaris on her belly) and some eczema rash that comes and goes on her upper thighs (precipitated by underwear I think). Bear has KP on his upper arms and knees, nothing to be concerned about, but since KP is a form of eczema I am worried he might still develop it. After all, he has a 25% chance of getting eczema too.  I put on a brave face but inwardly I am afraid too. Non- lethal allergies may not take your life but they can certainly take the quality out of it and they are certainly life altering.
Posted by Marlis at Thursday, March 31, 2011 4 comments: Links to this post 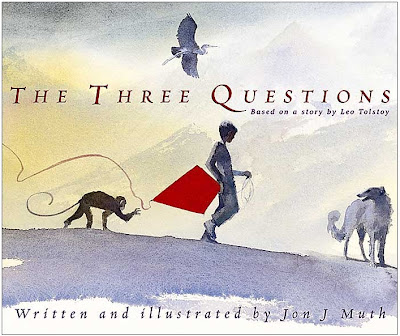 Sometimes you come across a decent book. At times you may be lucky and pick up one that's pretty good. But rare are the times when a book is perfect. A book which carries a message where everyone can take something away from.  And which is beautifully illustrated. Not the pretty 'awww, that's cute' illustrations. But  the kinds of illustrations which contribute to the written word in a way that completes the experience to perfection.

Several years ago,  during a scholastic books bookfair I came across one such book. It is titled 'The Three Questions' and is based on a story by Leo Tolstoy. This book is written and illustrated by Jon J. Muth.

There once was a boy named Nikolai who sometimes felt uncertain about the right way to act. 'I want to be a good person,' he told his friends. 'But I don't always know the best way to do that.'

The story deals with three main questions of life.

Nikolai's friends are a a heron named Sonya,  Gogol, a capuchin (by the looks of it) monkey, and Puskin, a gorgeous borzoi.

In the story, Nikolai asks his friends three questions. And the three friends give him honest answers, as they see them. But as Nikolai ponders the three different answers he realizes that their answers didn't seem quite right to him. So, he decides to visit Leo. Leo, the turtle, whose ancient wisdom would surely guide him.

I will let the story tell the rest.

It is a timeless message which transcends age, gender and creed and I encourage you to read this book. And if you have done so already, ready it again.
Posted by Marlis at Monday, March 28, 2011 1 comment: Links to this post 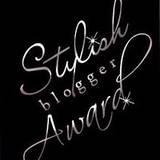